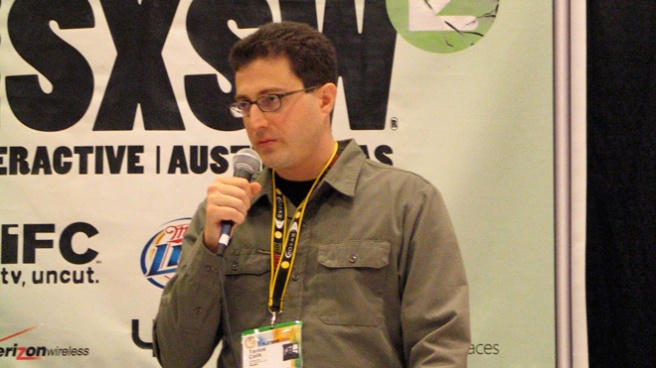 Tantek Çelik, Chief Technologist at Technorati, is shooting to enable the independents of the world. Building blocks are built by both experts and non-experts to advance the enablement of independents.

Tantek created the idea of barcamp out of his experience with foo camp; why not have it on the same day as foo camp? They registered the domain 6 days before the event and reverse engineered the requirements to run it from the foo camp Wiki.

We’re now watching a friggin’ music video barcamp rehash. This should lead to a point (because the video is a bit over the top)… So people around the world jumped on the idea of barcamp. The barcamp Wiki led to replication and building; Building blocks.

The challenge is not only creating building block for ourselves, or friends, or community… but the people who are on the other side of the digital divide. Tantek’s position is that we are the privileged, so how do we provide building blocks for others who are not.

End live-blog (well, pseudo live… the WiFi was down).

Sure… to a degree. This is all good within our sphere of reality. But Wiki’s and tagging and foo camps mean nothing to people stuck in the real; struggling to get by to pay the rent, put food on the table, pay for their children’s education. Tantek’s challenge still applies, but how?

In the Q&A, I asked him how we can apply this concept to the digital divide and people operating outside the context of content creation — people who are stuck in a service based economy. A fair question? Not really, but it opened up the conversation a bit. Tantek feels that creating building blocks saves people time, and time is money and freedom has a cost. Very true, but the question remains.

Disclaimer: This is live blogging; all quotes are paraphrases.

James Surowiecki, staff writer at the New Yorker, speaks about the future of tapping into the wisdom of the crowd

– Making a horseracing analogy to the wisdom of the crowds. As the odds go, so do the results. The idea is that based on the varied expertise of the crowds, the odds begin to stack up in order.

Wisdom of the crowds seems to be more about tapping into people to forecast results (in his mind). Interesting conversation, but it’s very much about capitalizing on people. So far…

Now James is talking about tapping into diversity, and how groups of less intelligent people up the solution factor when they’re introduced into a crowd of experts. They make the group smarter, which only seems to make sense based on each of our individual perspectives and life experiences. I mean, how do you quantify knowledge?

It’s a mistake to try to seek out the one or two experts to find a solution to your problem; experts don’t have a keen sence to the limits of their knowledge.

Well said, James. He’s heading in a direction that matches up with the thesis of Kent Bye at the Echo Chamber Project.

Diversity reduces the ills of homogenous thinking and automatically moves the role of the Devil’s Advocate about, keeping the viewpoint fresh.

Independence is about people making judgements upon their own knowledge, not piggybacking peer pressures. Group decisions can be madness (lynchings) or mediocre (business meeting); “we often put too much of a premium on consensus.” Instead of tapping into the intelligence of the people in the group, they go the opposite way. What we want is for people to act independent in the group, so those viewpoints can be culled for a greater knowledge; not the opposite.

Great analogy to opposite side of the street parking, where immitation works. If no one moves their car, street cleaning being suspended is the correct assumption.

But immitation is problematic if groups follow each other, nothing stands out as knowledge. Independence is problematic because people want to appear credible. Absolutely.

The transition to the internet…

He states that the problem of the internet is that it breaks down independence. “People get locked into relatively small worlds.” This is good for community, bad for collective intelligence. Circular mills are the result of such interactions; following the ant in front of each other to our own demise. One strength of the net is to randomize connections and sources of information. This is the fundamental lesson of collective intelligence on the net.

Ebb and flow; the iteration of input and output.

We are living in a society that feels the need for individual power, leadership etc. Too much information diffused between people is ‘bad.’ The mix of bottom up knowledge with these top down constraints creates interesting times.

Disclaimer: This is live blogging; all quotes are paraphrases.