The recent announcement of Facebook “working on” a Dislike feature could read like an overstated talking point for a seemingly simple update. I mean, design an icon, add it to all posts and register the count, right? What could be so involved to make this such a “working” situation?

Brand integrity and the bottom-line would be the short answer.

This “minuscule” feature update has probably been tossed between Facebook upper management for a while now, but not due to a “slow to respond to feedback” perception as many users might believe.

The Like behavior has become ubiquitous with the Facebook brand; it’s one of the core experiences we have when when using the product. I’d imagine management realizes that Like has transcended the brand itself, becoming a pseudo-proprietary eponym for all likable (favorite, best, etc.) interactions online. Even offline the term “like,” used in practically any context, has become the a collective linguistic signifier for the upturned thumb, which equates with the Facebook brand.

That’s a valuable interactive component for an online product; as valuable as asking for a Kleenex instead of a tissue. As my former colleague Dan Saffer describes it:

[…] Microinteractions, when done well, can become Signature Moments that are associated with the brand. Facebook’s “Like” is one great example. […]

Facebook isn’t going to disrupt such brand DNA haphazardly. While Dislike may make perfect sense to the user within the context of registering a quick opinion on a post, it introduces tangible degrees of dissonance to the purity of the brand as a diametrically opposed interaction. Disrupting such a key aspect of the brand—with the potential of turning the simplicity of a Like experience into something heading in the direction of the faceted rankings of posts on Buzzfeed—takes a measured approach.

So yes, it’s a simple execution, but not from a brand strategy perspective.. and even more so when considering the bottom-line.

Adding Up The Ads

From individuals (artists, musicians, politicians, etc.) to businesses (phone companies, restaurants, airlines, etc.), people have recognized the value of a Facebook presence, understanding that a high numbers of likes on a Page can provide:

This understandable path to credibility and gained attention has become a strong revenue model for Facebook, as in-product advertising—presented to highly targeted users—drives conversion to Liked Pages.

So where would Dislike begin and end in this business model?

I would imagine that if Dislike is rolled out to all posts and comments, users would expect the ability to downgrade everything else as well. AT&T’s 5M plus Likes looks “impressive” when positioned alone; add in the context of, say, 35M dislikes and… “Houston, we have an issue here.”

This is the fine line that Zuckerberg tows.

One persona—the daily user of Facebook that posts to generate conversation with friends and/or the general public—would thoroughly enjoy the ability to provide “truth” to everything; from politicians to corporations to local restaurants to individuals. But revenue providing personas? They’re not going to enjoy catching one-to-one cancellations of hard-earned/paid for Likes.

It’ll be interesting to see how Facebook handles the different interests in play, though I have a pretty strong feeling that they’re going to lean in the direction of catering to the user base who parts with cash. Call me crazy.

A Wrench In The Algorithm 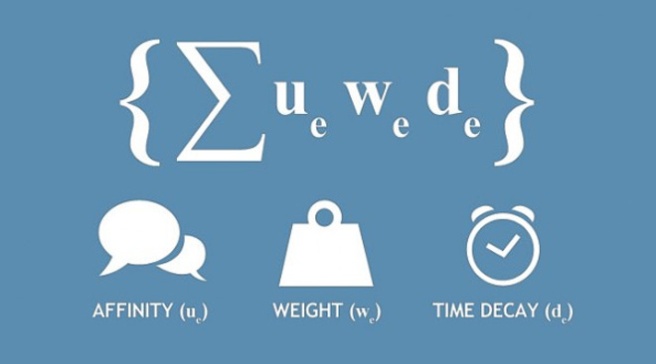 Lastly, and potentially most interesting to me (aside from people de-friending people left and right for dropping explicit, negative, system feedback such as DISLIKE!), is how the behavior of Disliking would affect the News Feed. Here’s how Facebook positions its purpose:

The goal of News Feed is to deliver the right content to the right people at the right time so they don’t miss the stories that are important to them.

Facebook designed the approach for how to filter content based on user behavior, and then codified these specific choices it into an algorithm. Of course, no one will be 100% happy with the results, but that’s to be expected and quite honestly, we’re not dealing with brain surgery here. As long as the context of inclusion feels like it’s in the ballpark, user won’t complain… too much. That said, the behavioral decisions are somewhat obtuse at times. Here’s the approach (from 2013) with my comments in bold:

Now toss the Dislike feature into the mix. Am I disliking my friend’s contextualization of a post, more so than the post itself? If I’m passionate about the subject matter, I probably wouldn’t want to see less of it based on a dislike; I may want to dislike more of the same to remain vigilant with my position and potentially impact other people’s perspectives. It’s a tricky balance.

While I’m constantly berating myself for the amount of time I spend on Facebook—tending to draw some pretty ill conclusions about what drives our society’s collective addiction to connecting, pontificating and arguing—I have to admit that this evolution intrigues me. Don’t agree? Like this post and I’ll argue my position on your wall.